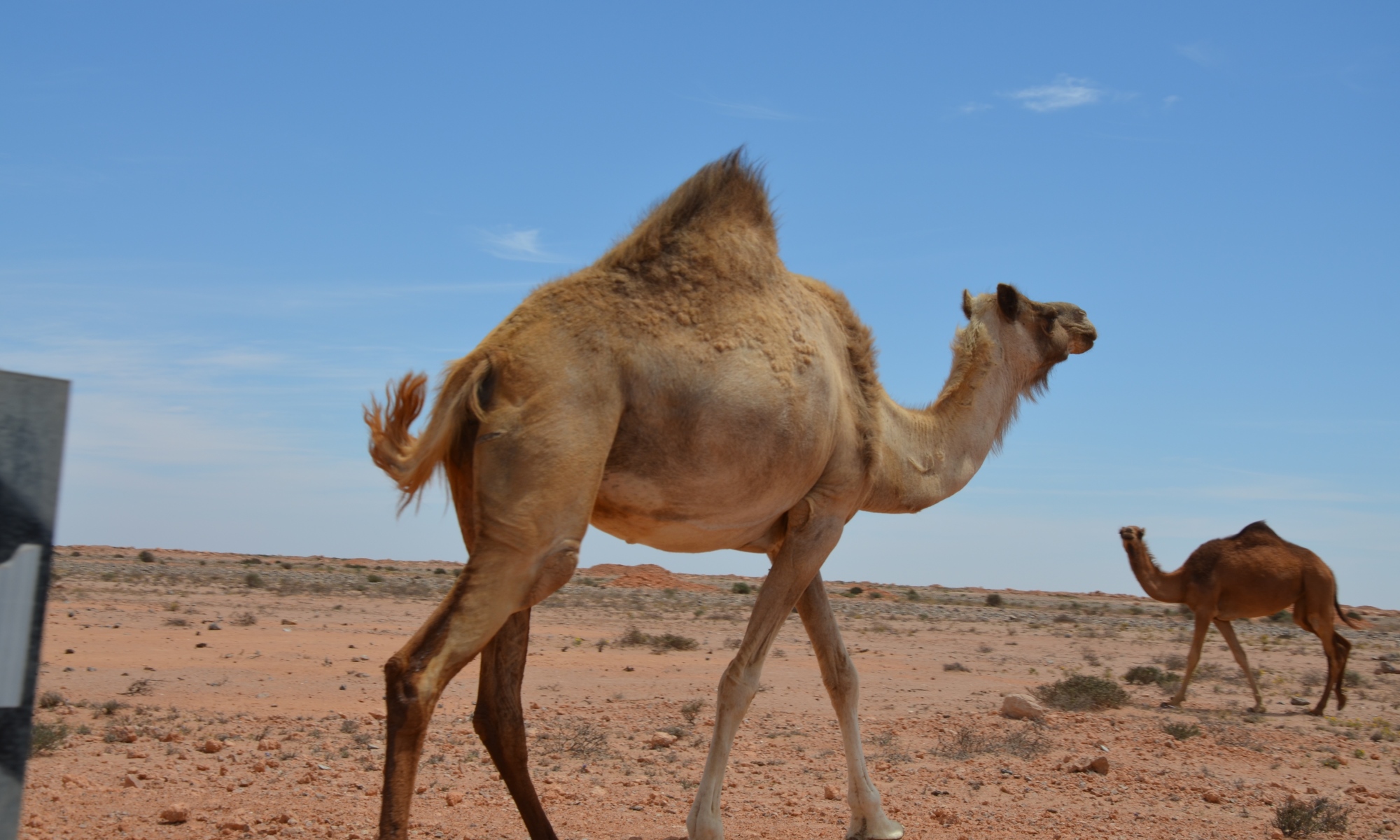 Once I saw the small cockroach running over the coffee table in the fancy hotel it was time to leave Layoune. Today I reached the southernmost part of the journey, and it was time to drive north again. Since I had a long day ahead I left early, only to loose 1 hour o get out of town. Traffic? Shopping? Attractions? No. Police controls, two of them at the exit of town. After that came an hour’s drive through the desert dotted with trees hanging on one side, giving shade under them. The dunes were spectacular, and at one stop I took my shoes off and walked barefoot through the warm sand. 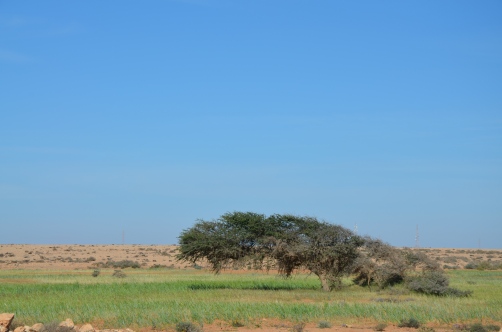 At the second police stop in Samara the office asked not just for the passport, but also for the yellow “fiche”. I couldn’t find it, and then remembered how I handed it to the police in Layoune and couldn’t remember to get it back from them. What to do? Drive back 150km and forth 250km and loose 3 hours? For a piece of paper? It didn’t make sense, and I moved on, but had a bad feeling. These stupid formalities are a delight for border guards. Especially in a country where bribes are everywhere and if you have to catch a ferry at a specific time, something the police officers know and might use against you. Anyway, the rest of the day I spent driving hundreds of km north, mostly in straight line, through a changing landscape. At the beginning it was all light brown, sand and stone desert. It got less sand and more stone over time, then darker in color. Every now and then a high, flat-top mountain appeared. There was almost no vegetation. Again I crossed the theoretical border into Morocco without noticing it, it seemed like one country. Just the police controls with passport check reminded me there was some sort of higher security. In the north police juste waved cars through mostly. 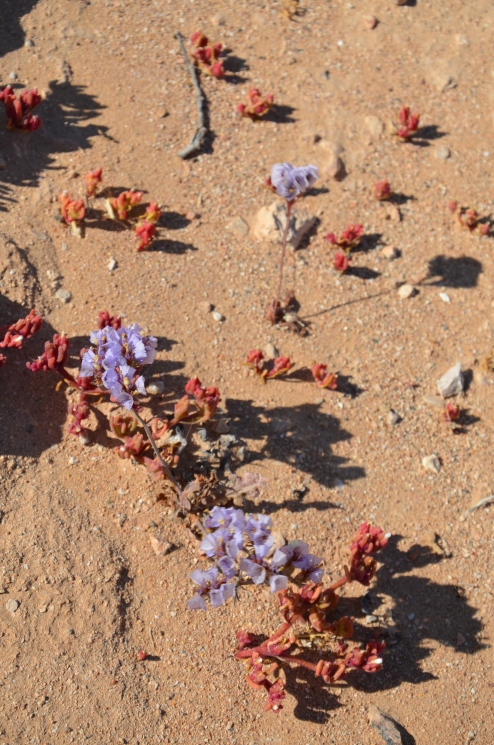 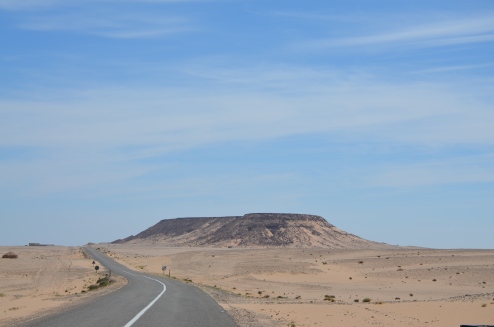 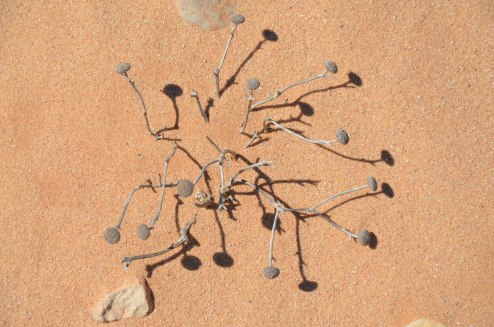 After lunch in a roadside grill (chicken and fries) it started to get hilly, and some green appeared. The 130km from Tan Tan to Guelmin were the only stretch I drove twice on this trip. The road was not too good and narrow, overtaking trucks and busses made me almost slip of the tar on the left. Approaching a hill I overtook a bus before stopping at the usual police checkpoint. “Bonjour, ça va? Passport please” Like usual. “Driving license. Car papers. Green card. Customs form.” Why all these documents? “You have committed a grave infraction overtaking the bus on a straight line. 700Dh.” WFT??? I made a mistake in this case, since I spoke French with them, giving the police the advantage to speak in their language with me. I insisted to first get the fine in a proper form, and then hand over the cash. The police officer started talking to me about law and order, about how I should feel at home in Morocco, and if I didn’t trust him to not hand over the cash. I called the German consulate to check on local regulations and make sure I made no mistake. When these guys saw I wouldn’t just pay they had to fill the form and I paid. Looking back to the road I had come from I was sure I overtook the bus before the line got straight. As I was pretty sure I didn’t exceed speed limits in the previous two stops. I left without signing the fine and shaking hands with these guys, the usual robbery on the streets. As I got back into the car I tried to make this incident not sour the mood. But the sky got dark and cloudy, the bluetooth wouldn’t work and I couldn’t listen to my podcasts and it took a while to get over this. It was not about the money, but about the principle that a guy in a uniform can use his will to distort rules to fine a person that visits his country in good intentions. These are the people that make me not come back to places. 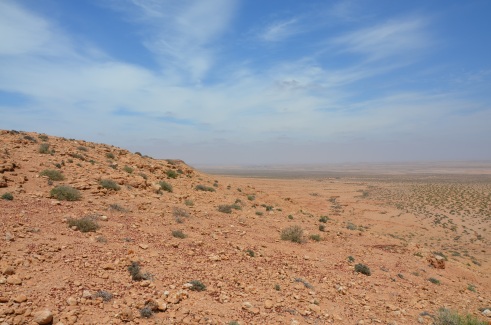 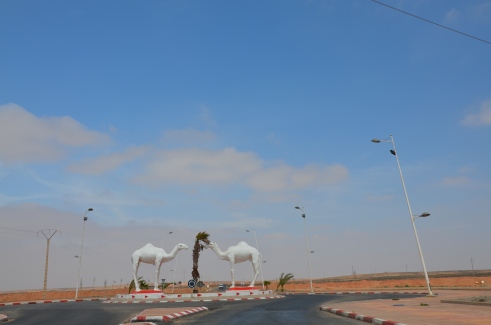 After this point, the weather got worse, it even rained a bit. The landscape got hilly, then came the mountains. Brown converted to green, trees appeared. At Tiznit I fuelled up, got cash (the police had stripped me of my reserve for the next two days) and drove into the mountains. I was late, and the sky ahead didn’t promise well. The road was all curves, fun to drive, except for the local traffic, but then suddenly the road got covered in fog or clouds. I had to slow down to 30km/h, turn on the fog lights, and make sure I didn’t run over a local in his dark Berber coat appearing suddenly in front of me, I could barely see 2m ahead. After half an hour of fog the visibility improved, but the light went away, and then the road disappeared on a stretch under construction. In the low lying Mini the untarred road wasn’t too comfortable, and when the ground converted to mud I got scared I might get stuck. But somehow I got over it, and at 21:30 reached Tafraoute. I had lost 1,5h to police checks today, and missed the beautiful landscape in this mountain range. I went looking for a hotel, but the ones I saw were pretty bad. There was a decent one in the center, but full. I drove around, and checked the Google map on my iPhone that I had loaded the night before. I found two more hotels up the hill, and one of them had a room. Another day ended well, tomorrow I’ll discover the mountains around here.