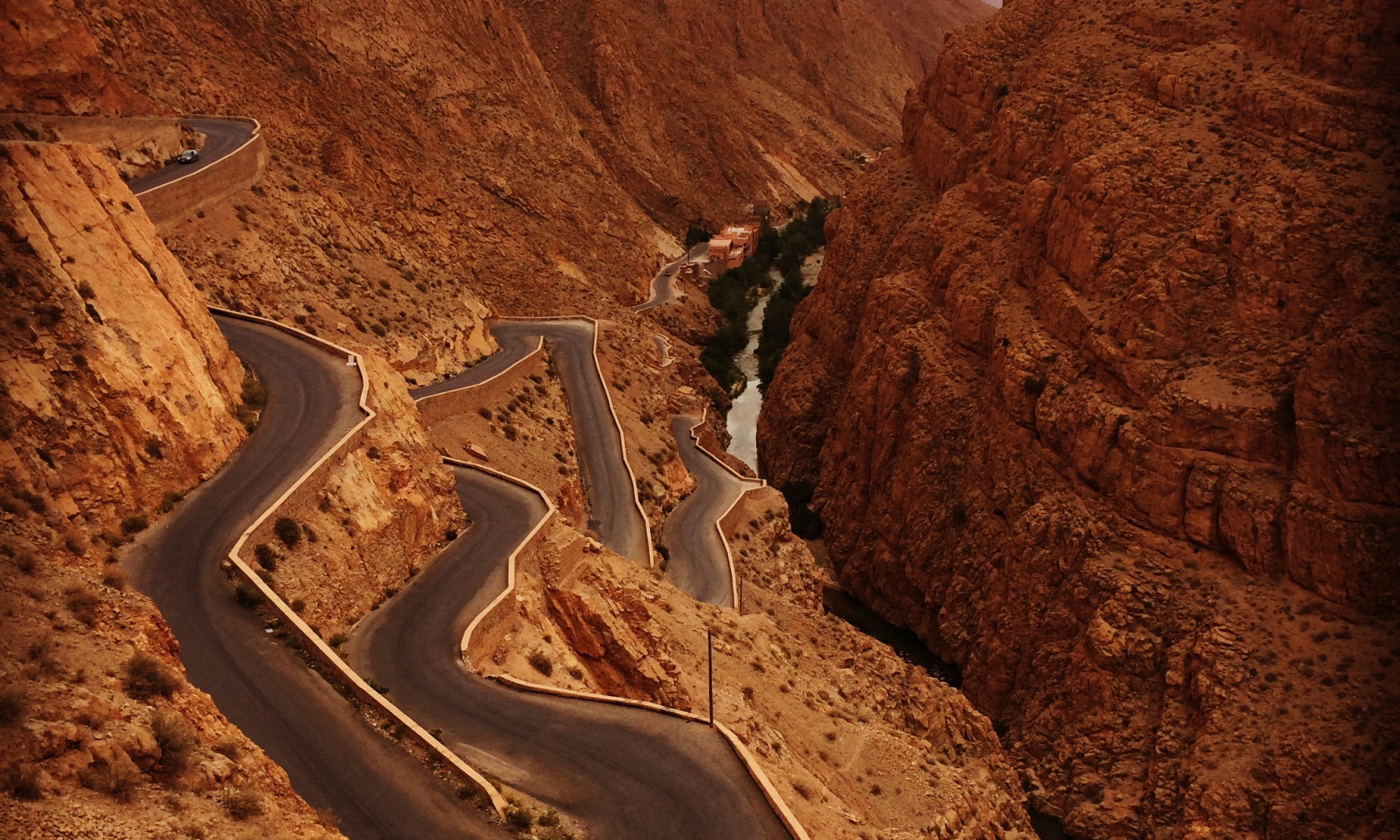 The night in the basic hotel with shared bathroom was quickly forgotten over breakfast on the main road, watching the 4×4’s load the tourists and prepare their day. After yesterday’s fiasco and the many kms lost vs plan today was the moment to catch up. I wanted to cross the Atlas and reach Fes in the late afternoon. I didn’t remember much about the road conditions from the last time I was in the area, and checked out the shortest route over the mountains, passing the Gorge du Dadès.

The valley after Ouarzazate was littered with tourist shops, restaurants and hotels, so I drove through as quickly as the local traffic permitted. Once the road to the Gorge left the main one the tourist trail got even worse initially, but diminishing the further I drove into the valley. Surrounded by steep red and brown mountains, the Dadès valley was a green line at its bottom, with many berber villages made of mud brick houses, a beautiful view. The road leads gently though the valley, until at some point the Gorge gets narrower and the road climbs up steeply in S-curves. It seems made for sporty cars like the Mini. In the narrow Gorge the road then climbs down again, and after a few km the narrowest point is reached, where the road and the river are the only space left between the two mountain sides! Beyond that point, the road gets a lot worse, with un-tarred stretches, and later just a sand and stone track that climbs into the mountains. The map showed this as a normal road, so I kept trying my luck hoping the road would get good enough to cross the mountain. But it didn’t, and the poor Mini had to get his offroad capabilities tested again. 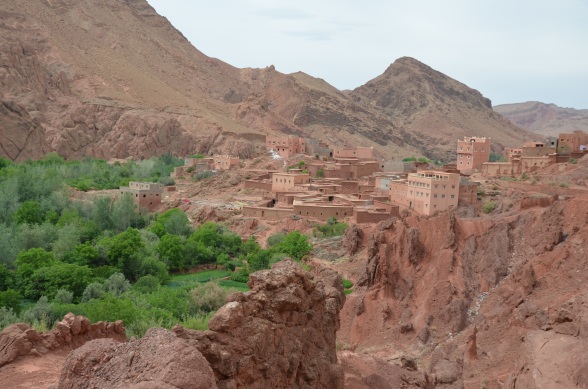 Amazed by the wonderful mountains all around me, these arid red-brown layers of rock and sand with barely any vegetation on them, the wind blowing up dust clouds, I kept driving on, and forgot the bad track. Several 4×4 convoys came towards me, staring at the Mini with big eyes. The track got so narrow, that just one car could pass, and I had to wait for the other car at a few broader spots made for passing. I stopped some Italian bikers and asked about the road ahead. “35km offroad, the last 10km very bad. But you can make it.” I kept driving. Then came two German jeeps. “30km offroad, the last piece quite bad, but don’t worry, you’ll make it”. I kept driving. A group of tourists in rented white Mitsubishis didn’t stop. And then I had a group of Portuguese in their Land Cruisers in front of me blocking the road. As they saw the Mini driving towards them they stopped, got out of their jeeps and took pictures. “We thought we are crazy to come up here in our cars, but you? Congratulations for making it up here!” “How is the road ahead?” “Bad, you won’t make it. There is a stretch of 10km with rocks that will kill your car. After that you’re fine. You should turn around. But feel free to try it.” Shoot! I was just 15km away from a good road, that would make me get to Fez in the late evening. If I had to turn around, I would loose 3-4 hours and never make it to Fez before midnight, provided no other surprises would cross my way. But if I’d loose a tyre up here? And how much more could I mistreat the car? The road up here was way beyond what it was made to resist. I turned around, and drove back the entire valley in 1,5h. 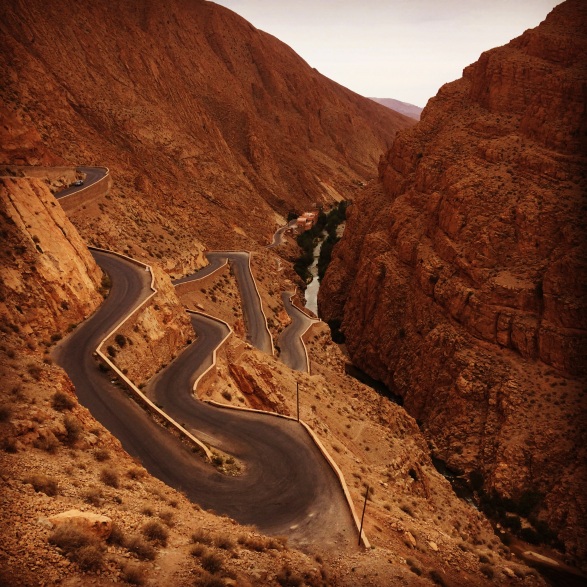 At this point a race began, to get as far north as possible. I had a few hours of light left, and the main road was in OK conditions, leading pretty much in straight lines through a vast valley, with the Atlas mountains to the left and a stone desert to the right. Out here there were few police roadblocks, so I made good progress until Errachidia. Here in the last light of the day I fuelled up, washed the windows to be able to see something at night and took off into the mountains on the main highway towards Midelt, Azrou, Fez. The mountain road must be beautiful in daylight. But at night it was a pain. Most cars couldn’t or  just didn’t turn off the fog lights, blinding me continuously. There were a lot of vehicles without lights around, and people walking on the border of the street in dark clothing were an additional risk. I thought about how I almost drove into a couple of animals in Siberia and realised these roads were full of donkeys, sheep and goats during the day. I got tired. As I reached Midelt, a big hotel with a lot of 4×4’s parked in front came in sight and I stopped immediately. They had a room, the kitchen was open and still served a full menu, I was safe for the night! 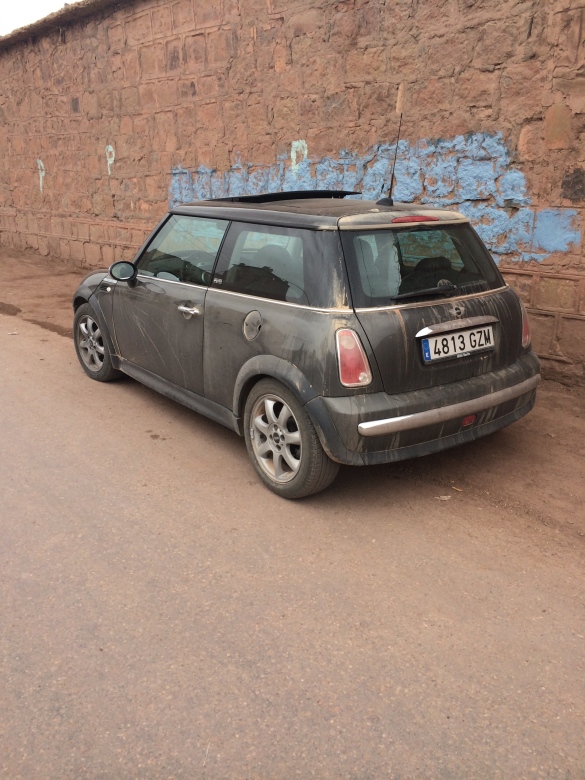