So, I’m writing this from an electro bar/club I ran into on my way back to the hotel from dinner. It’s apparently called Post Bar. The air was half summer half heavy rain, the sky dark on one side and fair on the other, and quite a breeze blew through the street as I left the restaurant. I had had some delicious dry meat and the Belarusian version of my grandmother’s Reibekuchen (potato pancakes), was happy to have found a characteristic place to eat local food. Then suddenly I heard an electro track I’ve listened to a thousand times on a tape a friend of mine had recorded in Rome in the 1990’s. Heart attack! I follow the music into a small bar, few people are around. A guy starts to talk to me, I get a craft beer (very tasty Minsk style) and then the girl at the bar explains me what this is about. A group if friends that run a bar nearby “got” a renovated, old brick building on this lovely street behind my hotel. And they do art exhibitions and parties. Tonight two girls DJ, electro. Great music. And there are apparently just two lousy vinyl stores in town. I love this spontaneous stuff that happens on the road!!!

So, step back. This morning I overslept. The start of this journey was a bit heavy, the Mini seats and eastern roads are taking revenge on my back. Breakfast at the hotel in Grodno was a flashback to so many moments behind the former iron curtain. Lots of employees in uniform sitting around doing nothing, supervised. Stale Soviet luxury breakfast. The couple at the table next to me orders omelette a la carte (wise choice) and a bottle of sparkling wine (even better if you don’t have to drive). I check out and do a last tour of Grodno. The old castle is getting a makeover, the new one is boring (Soviet renovation that needs renovation by now). Bye bye Grodno.

During breakfast I had decided to see the hero city of Brest. The road leads 3h south of Brest through the woods along the border with Poland. Towns featured lots of tiny, colorful wooden houses with few straight lines, and village markets on the main road where babushkas sold fruits, vegetables, honey and other local produce. Occasionally, abandoned Soviet concrete buildings littered the landscape. Along the way there were plenty of Great Patriotic War monuments. And at some point, in a small island of trees next to the road, also a big stone with a Jewish menorah. I guessed these lands have seen a lot in the last century. During a break I took a deep breath in the woods. The smell of the wet forest brought up childhood memories of long walks with my grandparents.

Reaching Brest from the north the charm of a Soviet province town greeted me. Google maps (last night I did a major map download session) leads me through the jungle of concrete buildings, past a Stalinist train station that looked like a baby PKiN, straight to the fortress. This place has changed hands multiple times in the first half of the past century, and the last battle basically destroyed it. The Soviets made a massive monument out of it. And still today classes of little pioneers, schoolchildren in uniform, visit the site. As do Belarusian soldiers and Lithuanian biker groups. Somber music plays in the background, of course there’s an eternal flame, and a massive monument with a very high phallic obelisk. 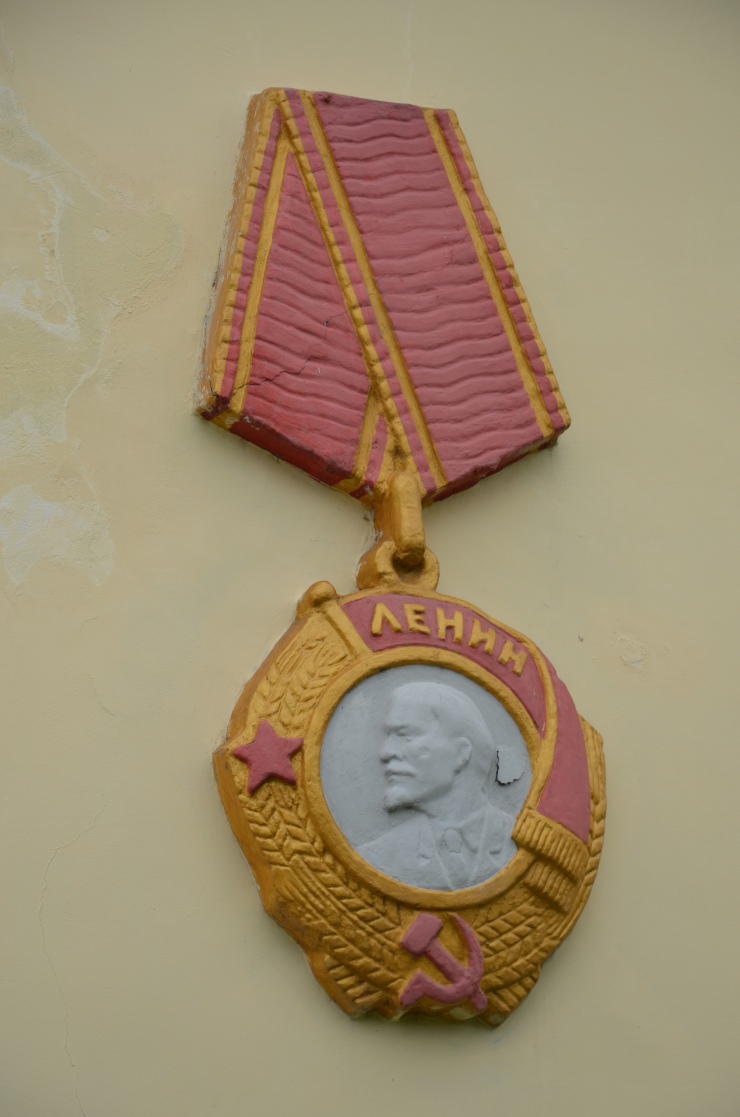 After satisfying my longing for Soviet war pathos, I got back into the Mini. Off to Minsk. Let’s use that expensive toll device and check out the motorways. Apart from the constant speed radars, the road was good, leading through endless flat plains of fields and woods.

100km before Minsk I stopped to see the Mir castle, a Unesco site. While the castle on the nearby lake with crows, ducks and frogs from afar looks lovely, a closer look reveals a site completely destroyed by renovations. Barely anything medieval left. I’d have loved to buy some apples from the old ladies selling fruit on the parking lot, but I had no cash.

Entering Minsk a little later endless Plattenbauten greeted me. And they are even building new ones around here! Time has stood still. On the way to my pre-booked hotel I got lost between the high rises of an anonymous residencial area. Then suddenly I entered the street of my hotel, and there were a few blocks of old brownstone houses. After checking in and a siesta I went to check out the area. Next door there was a lovely coffee shop that screamed “breakfast tomorrow morning”. Right next door a girl was DJ’ing electronic music in a bar. And the next house had a traditional restaurant with cozy wooden cabanas outside where I had dinner.

After a day mostly in the car the fresh air outdoors felt good. A cacophonia of birds, wind, folk music from the restaurant, cheap techno from several cars and the electro sound next door played the background music. On my way back to the hotel, passing the electro club, I suddenly heard a track… start reading again at the top.