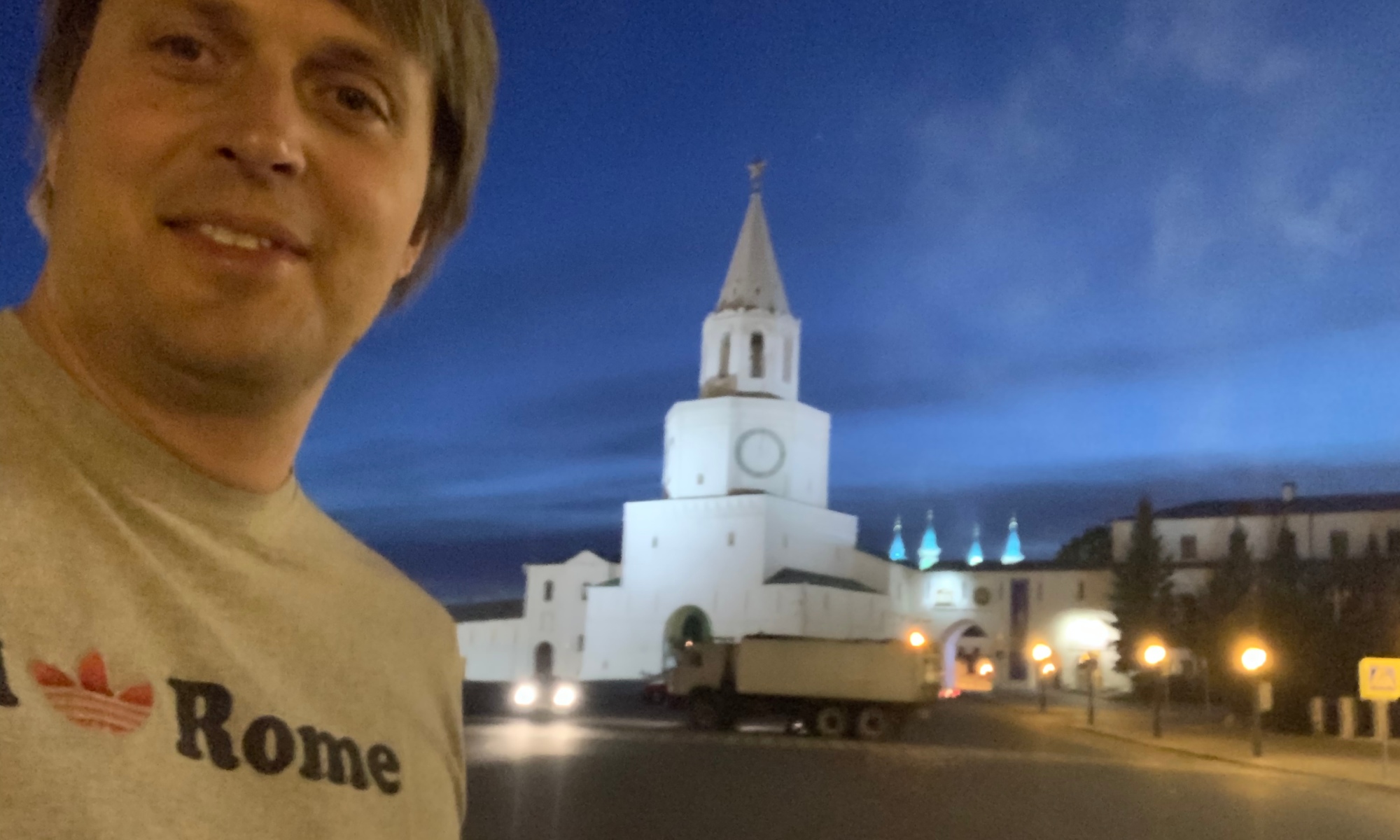 Leaving Nizhni Novgorod, the weather started to worsen and it rained intermittently. The following six hours saw me driving eastbound, parallel to the Volga without ever seeing it. In general there wasn’t a lot to see, the landscape was the same as the past days, and the new motorway had no thrills to offer. At Cheboksary I crossed the river. On the Northern side the last two hours led through a more hilly landscape on smaller roads, including a natural park with a lovely forest. I reached the outskirts of Kazan at about 20.30, and it was already dark. At some point I took a right turn out of a high rise residential area, and got onto a bridge, and suddenly on the other side of the river the local Kremlin with the illuminated white walls and Mosque stood on the other side. Along the riverbanks there was a lot of action, people on the street, a festive atmosphere was around. I dropped the car in the hotel’s garage, checked in and put some long pants on. It was windy and cold. The upper part of the old town was deserted, and as I reached the Kremlin gates fireworks started over the river. I started to run around the walls to get a picture, and the moment I got to see the river the last firework exploded before I could take a picture. The short firework on the river seemed to have been the grand finale of Russia day in Kazan, as shortly after a stream of people came started to fill the previously deserted streets of the old town. I found an open restaurant and managed to eat something before they closed. I need to change my days’ rhythm, starting earlier and finishing earlier.

The next morning I discovered that my hotel was apparently the former building of the Tatarstan writers union. Not that this was a familiar organization to me, but the building was part hotel, part museum, part restaurant. On display were plenty of memorabilia from Soviet times, the gentlemen on the pics all seemed to be WWII heroes and on party lines with their mission as writers and poets. Sunshine and a bright blue sky greeted me outside as I went for a walk around the old town, checking out the Kremlin in daylight. It was an interesting building complex, mixing Russian and Central Asian elements, featuring an orthodox church and a mosque, but renovation had killed all old charm. The place looked brand new. At the entrance stood a big monument of a man breaking free from barbed wire. In front of it a girls choir in folklore sang a song – in playback, as they recorded a video of them. Inside the Kremlin, a group in uniforms, half boys half girls, was waiting for a tour. Some girls had taken off their heels for a break, and were freshening up makeup and hair, while the boys chatted separately. At some point an older guy came walking from a big white Toyota Landcruiser parked in front of an official building. The whole group ran to the take position, boys on one side, girls on the other. The older man said a few words, then the whole group went in for a tour, not before the girls all went to pick up their handbags. All this felt somehow archaic.