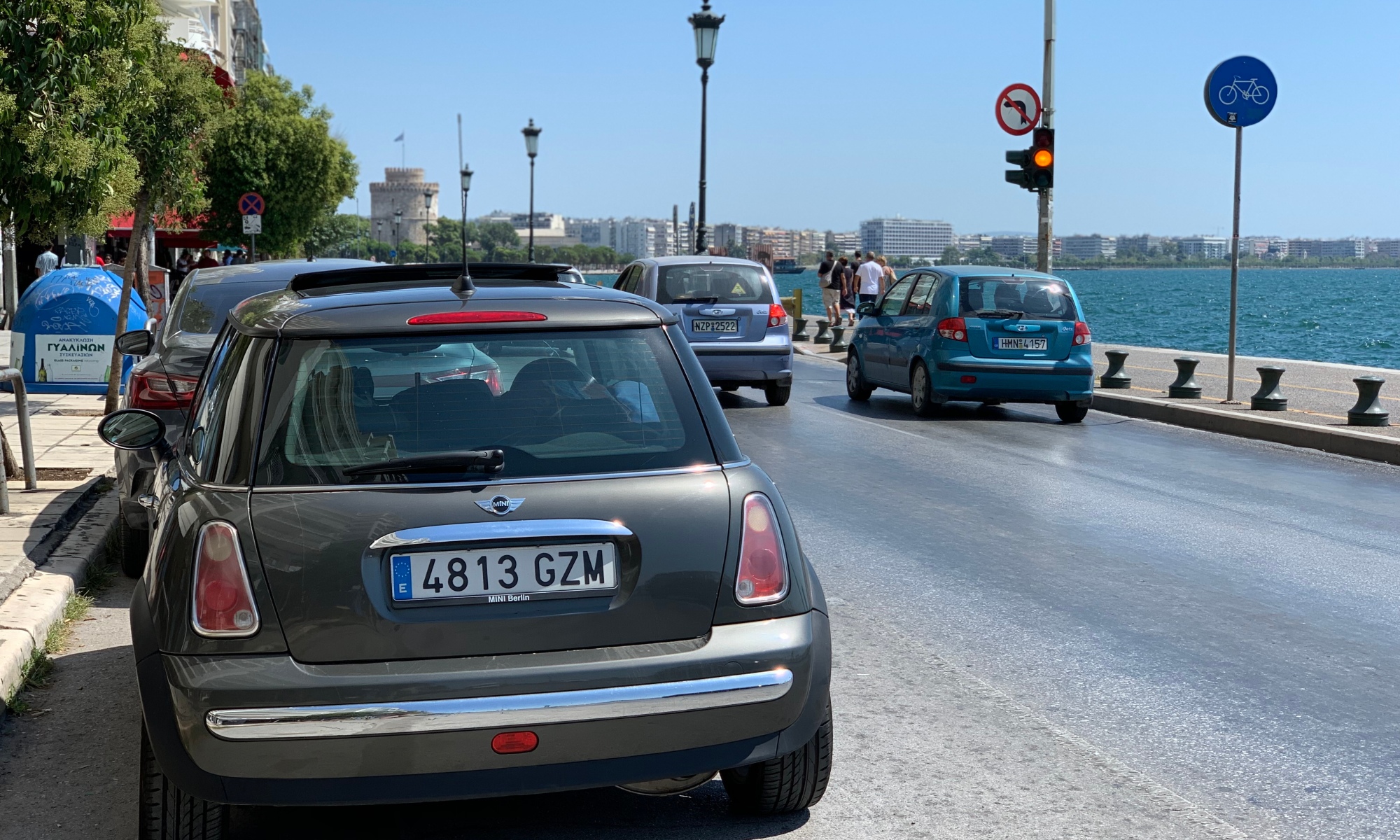 Istanbul in the morning of the Eid holiday was empty, trafficless and calm when I left it westwards. I’d never have imagined using these words to describe the city. The few hours to the border passed without major excitements. I skipped a winery visit I had thought about, as the Mini was already overloaded with a multiple of the maximum alcohol allowed for import into the EU. This was my last border crossing on this journey, it took 2,5h in midday sun. The majority of this time I spent waiting in line on the Turkish side, over an hour. The formalities were swift, no questions asked, just a passport check. Approaching the Greek border post felt like a big downgrade, the building was in bad shape, old, not well maintained, very different from my 2013 entry into Romania. Checks were fast, a customs official asked me to step out of the car. “We’re born the same year!” he noted looking at my passport. “Anything to declare?” “Not that I’m aware of.” “Have a safe trip.” I hate not telling the truth, but this rare exception was for a good cause, just wine and spirits for friends and family.

In the six years since I drove through Greece last time things have changed for the worse. A general feeling of abandonment was all around. An overland version of Detroit. Off the main highway the roads seemed given up to takeover by nature a long time ago. Construction sites left in an unfinished state, the machinery in some cases rotting along on site. Abandoned factories, warehouses, shops, gas stations. Used car dealerships with vehicles waiting in the sun for a buyer that will never show up. All this had not been abandoned yesterday, but many years back. In the meantime, nature was clawing back its domain slowly. Trees and plants were shooting up everywhere, breaking concrete, tar, wood. Windows shattered, graffiti, “for sale” or “to let” signs that lost their color a few summers back. With few exceptions it was an omnipresent sight for several days all the way down to Athens. For a moment I thought maybe the businesses were closed for vacations, as the 15th of August is the main summer holiday and everything shuts down in Greece, bar the tourist sites. But there was a very clear difference between “closed for a few days” and “closed forever”. Many buildings were also beyond repair. What can a country do with these ruins everywhere? One day the bulldozers will have a lot of work waiting for them.

Thessaloniki welcomed me with a lot of the above, but in an urban setting and with a big grey area between “apparently inhabited” and “clearly given up”. Driving towards the hotel for the night in the afternoon sun I didn’t see the city center and was a bit sad. I had expected a more vibrant city. Over dinner on the rooftop I got a better overview of the town, and the next day I found a different Thessaloniki on my way to the BMW service station. The Mini got checked. The bad news were it was loosing not only coolant, but also steering liquid. And of course one day before a major national holiday there was no chance to fix any of that and get the needed parts. At lunchtime I toured the downtown area and had something to eat in a busy seaside brasserie. Thessaloniki was an interesting city, lots of heritage from centuries of different influences, a distinctive urban style. I have to come back to check it out with more time.

It seemed hopeless, but I gave it a try. Around 17:00 on the 14th of August I reached Alfa Estates, a winery that Burcak had recommended back in Istanbul. The gate was half closed, but when I drove towards it I saw somebody sneaking through the door. They were closed but not closed, a few pickups were waiting, and I got a quick tasting with winery tour all by myself. I further stocked up, adding two more cased to the Mini’s alcohol load. During the winery tour the lady showing me around had recommended a village not too far away that I went to check out. About 20 mins from Alfa Estates to the west, a narrow road led up into the mountains. The sky was dark with clouds, further away rain was pouring down heavily. The Mini ate one curve after the other. As we reached 1.350m, the village of Nymfaio appeared and it started to rain here as well, albeit not as strong. Strolling through along the main road a beautifully restored mountain village revealed itself. People were sitting in front of cafes under big umbrellas, a drink in front of them and engaging in conversation. A very old shepherd’s dog with a bear-like silhouette and shaggy fur strolled around the tables slowly. At a church further uphill there was a gathering with the priest talking to people in the courtyard. As I stepped into the small hotel they had recommended further down at a cafe a woman with blond curly hair and a friendly smile greeted me. She wanted to know where I came from and what brought me to Nymfaio. Then she got out a small glass and made me try a strawberry liquor she had made, then another berry liquor, then a Greek version of grappa her husband distilled. I was half drunk as I got my bag up to the room. From the terrace of the hotel the lightings over the mountains surrounding the village and covered in big clouds gave an impressive spectacle for dinner. The wind blew strong but it stopped raining. The next morning I went to see a bear sanctuary a short 20 mins walk into the woods from the village. Former zoo bears, dancing bears or other bears not capable of living in the wild were treated here, divided by age groups to avoid infighting. These very intelligent and solitary animals showed disturbed behavior sometimes, nightmares from their past life and hardship, according to the guide showing me around. I saw six of the 13 bears they had, and they were rather peacefully, looking at us with their heads on their claws, scratching their noses. With the wolf sanctuary down in the valley I was less lucky. None of them showed up. I guess it must have been siesta time in the heat.

The weather kept worsening during the day, a cloudy sky followed me to the archeological site of Agiai, where the father of Alexander the Great was buried in a very elaborate but small tomb hidden under a tumulus that got excavated and converted into a museum. The treasures on display, together with the armor and offerings for the dead were impressive, sophisticated and in surprisingly good conditions. It got late and I needed to move further south. At Volos I took a small road up into the mountains and it started to rain again, slowly at first, and then heavier the further up I drove. The sky was shining in a golden color from the sun behind the white and grey clouds. Zig zag curves, in and out of the forest again, small villages passing by, fog on the road, good road, bad road, up and down, criss crossing the mountain several times before reaching the Aegean coast. And up again along the ridge. Then hotel I had found was fully booked, but in the last daylight I found a simple tavern on the roadside, families and couples enjoying dinner in a rustic dining room and a veranda protecting from the rain. They had a no frills room and dinner with local fare and wine.

The next morning I spent time reading on the veranda over a simple but tasty breakfast, before heading back to Volos over the mountains. The weather had cleared up, bright sunshine on a cloudless sky. I reached the port Piraeus in the afternoon. The next two weeks I’ll be off, vacation time on an island in the Aegean. Time to rest and recharge.

One Reply to “Hellas”